Regardless of the principle of operation, an ideal LC detector should have the following properties:
Low drift and noise level (particularly crucial in trace analysis).
High sensitivity.
Fast response.
Wide linear dynamic range (this simplifies quantitation).
Low dead volume (minimal peak broadening).
Cell design which eliminates remixing of the separated bands.
Insensitivity to changes in type of solvent, flow rate, and temperature.
Operational simplicity and reliability.
It should be tuneable so that detection can be optimized for different compounds.
It should be non-destructive.

Most common Detectors of HPLC: 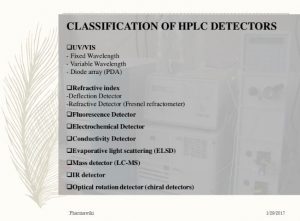 Detectors which allow the selection of the operating wavelength called variable wavelength detectors and they are are particularly useful in three cases:
offer best sensitivity for any absorptive component by selecting an appropriate wavelength;
individual sample components have high absorptivity at different wavelengths and thus, operation at a single wavelength would reduce the system’s sensitivity;

Depending on the sophistication of the detector, wavelength change is done manually or programmed on a time basis into the memory of the system.

Any chemical compound could interact with the electromagnetic field. Beam of the electromagnetic radiation passed through the detector flow-cell will experience some change in its intensity due to this interaction. Measurement of this changes is the basis of the most optical HPLC detectors.
Radiation absorbance depends on the radiation wavelength and the functional groups of the chemical compound. Electromagnetic field depending on its energy (frequency) can interact with electrons causing their excitation and transfer onto the higher energetical level, or it can excite molecular bonds causing their vibration or rotation of the functional group. The intensity of the beam which energy corresponds to the possible transitions will decrease while it is passing through the flow-cell. According to the Lambert-Bear law absorbance of the radiation is proportional to the compound concentration in the cell and the length of the cell.

For the SEC analysis, MW of analyte is estimated from the calibration curve drown using a set of known standards. However, by using a MALS, MW can be determined directly without the need of calibration curve. Also MALS can provide an absolute MW of the analyte with very low detection limit.

These bulk property detectors are based on the change of refractive index of the eluant from the column with respect to pure mobile phase. Although they are widely used, the refractive index detectors suffer from several disadvantages – lack of high sensitivity, lack of suitability for gradient elution, and the need for strict temperature control (±0.001 °C) to operate at their highest sensitivity. A pulseless pump, or a reciprocating pump equipped with a pulse dampener, must also be employed. The effect of these limitations may to some extent be overcome by the use of differential systems in which the column eluant is compared with a reference flow of pure mobile phase. The two chief types of RI detector are as follows.

The deflection refractometer, which measures the deflection of a beam of monochromatic light by a double prism in which the reference and sample cells are separated by a diagonal glass divide. When both cells contain solvent of the same composition, no deflection of the light beam occurs; if, however, the composition of the column mobile phase is changed because of the presence of a solute, then the altered refractive index causes the beam to be deflected. The magnitude of this deflection is dependent on the concentration of the solute in the mobile phase.

The Fresnel refractometer which measures the change in the fractions of reflected and transmitted light at a glass-liquid interface as the refractive index of the liquid changes. In this detector both the column mobile phase and a reference flow of solvent are passed through small cells on the back surface of a prism. When the two liquids are identical there is no difference between the two beams reaching the photocell, but when the mobile phase containing solute passes through the cell there is a change in the amount of light transmitted to the photocell, and a signal is produced. The smaller cell volume (about 3 ilL) in this detector makes it more suitable for high-efficiency columns but, for sensitive operation, the cell windows must be kept scrupulously clean.