Hello readers. Here are the Important Pharmaceutical Jurisprudence  Acts & Years which are considered to be precious in Pharmacy Acts And Regulations. These are must for all the Pharmacist & Pharma Students in India and other countries. Here we present important acts and developments in pharmacy profession in India. Important acts and developments of pharmaceutical Jurisprudence are arranged in timeline for better understanding. 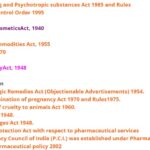 What is Pharmacy ACT about?

The PharmacyAct, 1948. The need of the qualified and trained pharmacists and their registration to respective Councils was re-emphasized by the Health and Development Committee, 1945 constituted under the Chairmanship of Justice Bhore. The foundations were laid for The Pharmacy Act based on the recommendations of Drugs Enquiry Committee and Health Survey and Development Committee. The Pharmacy Act, 1948, came into existence with the objective to regulate the profession and business of pharmacy.

1930: Government of India on 11th August 1930 , appointed a committee under the chairmanship of Late Col. R.N.Chopra to see into the problems of Pharmacy in India and recommend the measures to be taken.

1931: R.N. Chopra committee published its report in 1931. It was reported that a set of people known as compounders were filling the gap.

1940: All India Pharmaceutical Congress Association was established in 1940.

The primary objective of the Act is to ensure that the drugs and cosmetics sold in India are safe, effective and conform to prescribed quality standards. The Drugs Act was formulated in 1940 in pursuance of recommendations of Chopra Committee constituted in 1930 by Government of India.

1941: The first Drugs Technical Advisory Board (D.T.A.B.) under this Drugs act 1940 was constituted.

1948: Indian Pharmacopoeial Committee was constituted under the chairmanship of late Dr. B.N. Ghosh.

It is an Act with provision for levy and collection of excise duties on medicinal and toilet preparations containing alcohol, opium, Indian hemp (cannabis) or other narcotic drugs.

Recently, the Union Cabinet has approved the Medical Termination of Pregnancy (MTP) (Amendment) Bill, 2020. The Bill seeks to extend the termination of pregnancy period from 20 weeks to 24 weeks, making it easier for women to safely and legally terminate an unwanted pregnancy.

The objective of DPCO is to ensure availability of essential and life saving and prophylactic medicine of good quality at the reasonable prices. For the purpose of implementing provisions of DPCO, powers have been vested in NPPA.

2005: With the establishment of WTO and India being signatory to the Agreement on TradeRelated Aspects of Intellectual Property Rights (TRIPS), several new legislations were passed for the protection of intellectual property rights to meet the international obligations. Patents Act, 1970 has been amended in the year 1995, 1999, 2002 and 2005 to meet its obligations under the TRIPS agreement. Thus, the Patent Amendment Act, 2005 is now fully in force and operative.

2008: Guidelines for Taking Action on Samples of Drugs Declared Spurious or Not of Standard Quality In The Light of Enhanced Penalties under The Drugs and Cosmetics (Amendment) Act, 2008

2011: The National Commission for Human Resources for Health Bill, 2011

Tell me about Drugs and Price Control Order:

Drugs and Price Control Order, 1970
Drugs and Price Control Order, 1970 came into existence to fix the maximum sale price of bulk drugs and to fix the retail sale price of the formulations in order to avoid the huge profiteering in drug manufacturing and distribution. The prices of life saving drugs were brought under direct control of Government.