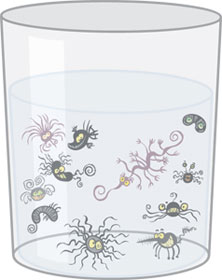 Identifying the isolates recovered from water monitoring methods may be important in instances where specific waterborne microorganisms may be detrimental to the products or processes in which the water is used. Microorganism information such as this may also be useful when identifying the source of microbial contamination in a product or process. Often a limited group of microorganisms is routinely recovered from a water system. After repeated recovery and characterization, an experienced microbiologist may become proficient at their identification based on only a few recognizable traits such as colonial morphology and staining characteristics. This may allow for a reduction in the number of identifications to representative colony types, or, with proper analyst qualification, may even allow testing short cuts to be taken for these microbial identifications.

ALERT AND ACTION LEVELS AND SPECIFICATIONS

Though the use of alert and action levels is most often associated with microbial data, they can be associated with any attribute. In pharmaceutical water systems, almost every quality attribute, other than microbial quality, can be very rapidly determined with near-real time results. These short-delay data can give immediate system performance feedback, serving as ongoing process control indicators. However, because some attributes may not continuously be monitored or have a long delay in data availability (like microbial monitoring data), properly established Alert and Action Levels can serve as an early warning or indication of a potentially approaching quality shift occurring between or at the next periodic monitoring. In a validated water system, process controls should yield relatively constant and more than adequate values for these monitored attributes such that their Alert and Action Levels are infrequently broached.

As process control indicators, alert and action levels are designed to allow remedial action to occur that will prevent a system from deviating completely out of control and producing water unfit for its intended use. This “intended use” minimum quality is sometimes referred to as a “specification” or “limit”. In the opening paragraphs of this chapter, rationale was presented for no microbial specifications being included within the body of the bulk water (Purified Water and Water for Injection) monographs. This does not mean that the user should not have microbial specifications for these waters. To the contrary, in most situations such specifications should be established by the user. The microbial specification should reflect the maximum microbial level at which the water is still fit for use without compromising the quality needs of the process or product where the water is used. Because water from a given system may have many uses, the most stringent of these uses should be used to establish this specification.

Where appropriate, a microbial specification could be qualitative as well as quantitative. In other words, the number of total microorganisms may be as important as the number of a specific microorganism or even the absence of a specific microorganism. Microorganisms that are known to be problematic could include opportunistic or overt pathogens, nonpathogenic indicators of potentially undetected pathogens, or microorganisms known to compromise a process or product, such as by being resistant to a preservative or able to proliferate in or degrade a product. These microorganisms comprise an often ill-defined group referred to as “objectionable microorganisms”. Because objectionable is a term relative to the water’s use, the list of microorganisms in such a group should be tailored to those species with the potential to be present and problematic. Their negative impact is most often demonstrated when they are present in high numbers, but depending on the species, an allowable level may exist, below which they may not be considered objectionable.

As stated above, alert and action levels for a given process control attribute are used to help maintain system control and avoid exceeding the pass/fail specification for that attribute. Alert and action levels may be both quantitative and qualitative. They may involve levels of total microbial counts or recoveries of specific microorganisms. Alert levels are events or levels that, when they occur or are exceeded, indicate that a process may have drifted from its normal operating condition. Alert level excursions constitute a warning and do not necessarily require a corrective action. However, alert level excursions usually lead to the alerting of personnel involved in water system operation as well as QA. Alert level excursions may also lead to additional monitoring with more intense scrutiny of resulting and neighboring data as well as other process indicators. Action levels are events or higher levels that, when they occur or are exceeded, indicate that a process is probably drifting from its normal operating range. Examples of kinds of action level “events” include exceeding alert levels repeatedly; or in multiple simultaneous locations, a single occurrence of exceeding a higher microbial level; or the individual or repeated recovery of specific objectionable microorganisms. Exceeding an action level should lead to immediate notification of both QA and personnel involved in water system operations so that corrective actions can immediately be taken to bring the process back into its normal operating range. Such remedial actions should also include efforts to understand and eliminate or at least reduce the incidence of a future occurrence. A root cause investigation may be necessary to devise an effective preventative action strategy. Depending on the nature of the action level excursion, it may also be necessary to evaluate its impact on the water uses during that time. Impact evaluations may include delineation of affected batches and additional or more extensive product testing. It may also involve experimental product challenges.

Alert and action levels should be derived from an evaluation of historic monitoring data called a trend analysis. Other guidelines on approaches that may be used, ranging from “inspectional”to statistical evaluation of the historical data have been published. The ultimate goal is to understand the normal variability of the data during what is considered a typical operational period. Then, trigger points or levels can be established that will signal when future data may be approaching (alert level) or exceeding (action level) the boundaries of that “normal variability”. Such alert and action levels are based on the control capability of the system as it was being maintained and controlled during that historic period of typical control.

In new water systems where there is very limited or no historic data from which to derive data trends, it is common to simply establish initial alert and action levels based on a combination of equipment design capabilities but below the process and product specifications where water is used. It is also common, especially for ambient water systems, to microbiologically “mature” over the first year of use. By the end of this period, a relatively steady state microbial population (microorganism types and levels) will have been allowed or promoted to develop as a result of the collective effects of routine system maintenance and operation, including the frequency of unit operation rebeddings, backwashings, regenerations, and sanitizations. This microbial population will typically be higher than was seen when the water system was new, so it should be expected that the data trends (and the resulting alert and action levels) will increase over this “maturation” period and eventually level off.

A water system should be designed so that performance-based alert and action levels are well below water specifications. With poorly designed or maintained water systems, the system owner may find that initial new system microbial levels were acceptable for the water uses and specifications, but the mature levels are not. This is a serious situation, which if not correctable with more frequent system maintenance and sanitization, may require expensive water system renovation or even replacement. Therefore, it cannot be overemphasized that water systems should be designed for ease of microbial control, so that when monitored against alert and action levels, and maintained accordingly, the water continuously meets all applicable specifications.

Another scenario to be avoided is the establishment of an arbitrarily high and usually nonperformance based action level. Such unrealistic action levels deprive users of meaningful indicator values that could trigger remedial system maintenance. Unrealistically high action levels allow systems to grow well out of control before action is taken, when their intent should be to catch a system imbalance before it goes wildly out of control.

Nevertheless, there are certain maximum microbial levels above which action levels should never be established. Water systems with these levels should unarguably be considered out of control. Using the microbial enumeration methodologies suggested above, generally considered maximum action levels are 100 cfu per mL for Purified Water and 10 cfu per 100 mL for Water for Injection. However, if a given water system controls microorganisms much more tightly than these levels, appropriate alert and action levels should be established from these tighter control levels so that they can truly indicate when water systems may be starting to trend out of control. These in-process microbial control parameters should be established well below the user-defined microbial specifications that delineate the water’s fitness for use.

Special consideration is needed for establishing maximum microbial action levels for Drinking Water because the water is often delivered to the facility in a condition over which the user has little control. High microbial levels in Drinking Water may be indicative of a municipal water system upset, broken water main, or inadequate disinfection, and therefore, potential contamination with objectionable microorganisms. Using the suggested microbial enumeration methodology, a reasonable maximum action level for Drinking Water is 500 cfu per mL. Considering the potential concern for objectionable microorganisms raised by such high microbial levels in the feedwater, informing the municipality of the problem so they may begin corrective actions should be an immediate first step. In-house remedial actions may or may not also be needed, but could include performing additional coliform testing on the incoming water and pretreating the water with either additional chlorination or UV light irradiation or filtration or a combination of approaches.

Purified Water Specification As Per Usp,

purified water & Water for Injection SOP as per usp,